Just Behind The Veil.

Today I attended the funeral of the father of a confirmation student.
He was a very well known man,  talented, composed many songs for various east Indian competitions and  lead the Marathi choir .... His passing away was sudden, this death was a shock even to me who didn't know him that well.

On my way to church I was thinking about the uncertainty of  our lives, there were quite a few unexpected deaths the previous year too. Its funny how we fool our selves into thinking that we don't face death every single day.
I spoke with my Dad about this a little later, his take on this amazes me. I am normally disturbed when such things happen coz I fear for my parents, I love them a lot. My Dad casually says, "We come we go we have to be prepared for it no one is here permanently". I know my father believes this because of the way he acts it out, he Isn't afraid to take our dogs on the road without a leash, I fear for them, he says what will happen will happen, and he is right. We cannot stop it or fight it. Yesterday I was disturbed when I heard this news, I prayed that God take care of my parents and keep them in good health, I also asked for strength to face such uncertainty. I realised I am no one to interfere with the will of God.
John Kinny was Loved, we know this. The amount of people grieving at his death stood as a testimony to his life. It is difficult to cope with the shock of suddenly losing a loved one, yet we need to realise, There is Hope.
This brings to mind a snippet from 'Harry Potter and the order of the Phoenix' where Luna Lovegood talks about her deceased mother.


'Yes, It was rather Horrible said Luna conversationally.'I still feel very sad about it sometimes.But Ive still got Dad.And anyway, it's not as though I'll never see my mum again is it?'

She shook her head in disbelief.
Oh,come on. You heard them, just behind the veil, didn't you?

'In that room in the arch way they were just lurking out of sight, that's all. You heard them.'

They looked at each other. Luna was smiling slightly. Harry did not know what to say, or to think: Luna believed in such extraordinary things....yet he had been sure he had heard voices behind the veil, too.
....
She walked away from him and, as he watched her go, he found that the terrible weight in his stomach seemed to have lessened slightly.

I visited Nashik recently Look what I found there ;) 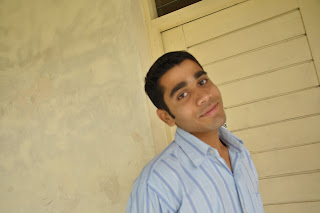 For those who don't know this is My Brother -Brother Dustin, he is a
Salesian and will be doing his first profession on the 24th of this month ... he was just trying on the cassock here. (Update 9/5/11: Had to take the pic of the Cassock Off coz my mum felt it wasn't right as he had not professed already, she compared it to releasing the picture of someones wedding Gown before the wedding,( this particular analogy didn't really work for me coz I have different views about weddings and wedding gowns.. )  However  I guess I should have been more sensitive about it. :)

This a real Big thing for him and for us too, I can’t believe that this is happening already, Dustu still feels unworthy because (m so glad for this) he realizes the responsibility he is taking up and has a desire to be true to it and wonders if he is capable of living up to it. I really don’t understand if we can ever be worthy, we need Gods Grace for that.
Really..... God sees and Knows what we couldn’t have seen and known in a thousand years :).

Posted by Unknown at 6:52 PM No comments:

I see it clearly but don't want to admit, The colours fade out bit by bit,  Revealing the deep deep parts of grey As fond old colour...